I was about to leave my job because of the atmosphere of disgusting behavior (pornography), but God intervened through other Christians outside of the toxic environment to give me encouragement & a church prayer group held in a parlor on a Wednesday night.  Let me tell you the story.

The other evening, I was on my break enjoying a tasty Babyruth and marveling at its nutritional value when one of my co-workers proceeded to share some sexual jokes in front of others, including me.  Keep in mind, I’m no prude, and I’ve heard this type of garbage before, but since being saved by Jesus, I find it more and more disgusting every time I hear it.  I excused myself and went into the locker room to enjoy the rest of my break in peace.  During that time, I posted this to my Facebook profile that garnered some supportive comments.

While I do have a problem with the profanity, I’m not going to be “the language police guy,” as you have to expect this type of language in the workplace from people – but the porn…UUGGGHHHH!

After this post, I received a private message from a friend which started this small conversation.

Let’s be clear about one thing, pornography, which includes passing around sex videos on phones with the volume turned up as I have endured on several occasions, sexual jokes (most of the breaks), innuendos, and the like, are considered sexual harassment/hostile work environment under the law.  We hear about these cases happening to women, but this law applies to everyone – yes, men can be sexually harassed in this fashion, and I felt totally defeated and degraded.  Throughout my time at work, I’ve had to deal with this type of thing – co-workers pulling out their phones to “pass the porn,” groping and disgusting commentary, and the excuse I gave to myself to keep me from fighting back was, “well, it’s factory work and I should just accept it.”

Over the course of the next few days, I was advancing my plans to set up a business (still doing so, but not for this reason now).  I didn’t want to go to work at all, and because of that mentality, I posted this to Facebook.

It was brother Steve that started this idea, that God had put me in this area (work) for some ministry/task.  My reply wasn’t as enthusiastic as you might expect (left it out intentionally), but this seemed to start a chain of events where God was starting to drop a message and encouragement about my situation.

Along with this message, a co-worker was asking some deep spiritual questions around the same day as the incident that started this whole thing.  All of this was coming out of the blue as this individual had never approached me with this type of conversation.

But, I was still hard-headed and getting ready for my exit, even with these things popping up.  It wasn’t until Wednesday evening that things started to take a turn, a turn towards victory.

While I was feeling consigned to my fate, but still having these instances floating around in my grey matter, I sent this message to my wife while I was on my first break, who knew what I was going through at work over the past six months. 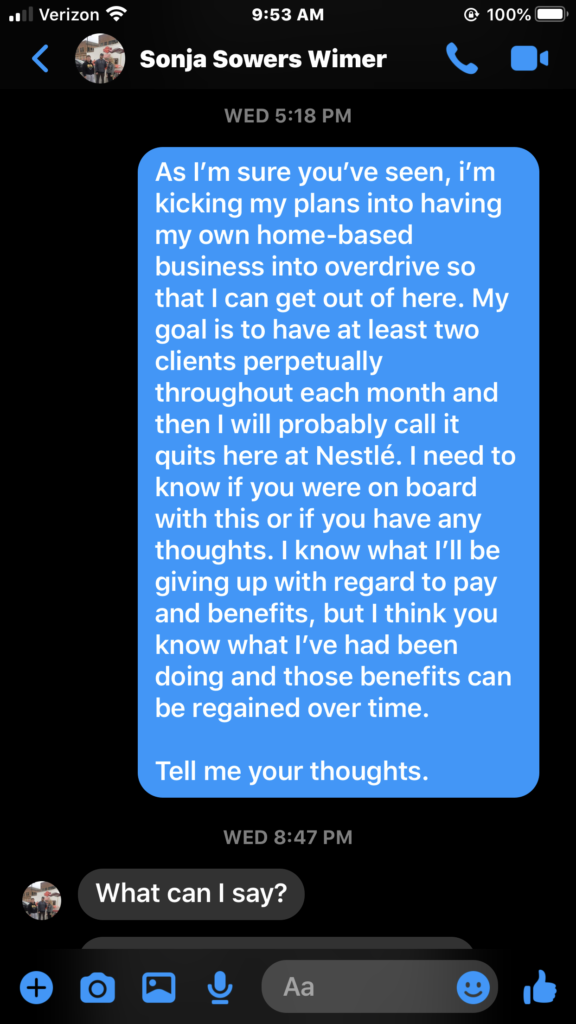 I had left it at that as I had to go back to my job.

At around 7’ish, while sitting on my chair pushing buttons, I felt a sense of peace, and what I could only describe as power, that seemed to not only rest on me but fill my whole being.  I didn’t know what kicked off this whole thing, but I felt it within me to praise God/Jesus and to praise Him aloud – very loudly, in fact.  I was professing scripture that I had memorized about victory in dark places as well as speaking in tongues.

What happened next was different.

God had put in my mind a story that my wife had told me about a woman she knew that went out and prayed against businesses/houses that were deliberately against God with regard to their practices.  She would circle the block, praying in tongues, claiming that area in the name of Jesus.  Months later, those businesses/houses seemed to “close up shop.”  At that moment, I began to claim EVERY AREA for Jesus Christ – the workplace floor, the halls, the stairs, and yes, the breakroom where filth abounds – all for Him from the comfort of my steel chair, pressing buttons to move meat through a grinder.

I knew that what I prayed/praised/proclaimed was in the Will of God and that it was done in the world of the Spirit.  At that instance, the heaviness that had been on me since the first utterance of the “joke” was lifted.  I had a new sense of vigor and determination like my battery had been fully charged and ready to work.

I went on my second break, and conformation came in from two sources – confirmation that was first started by my brother in Christ.  The first came from my wife. 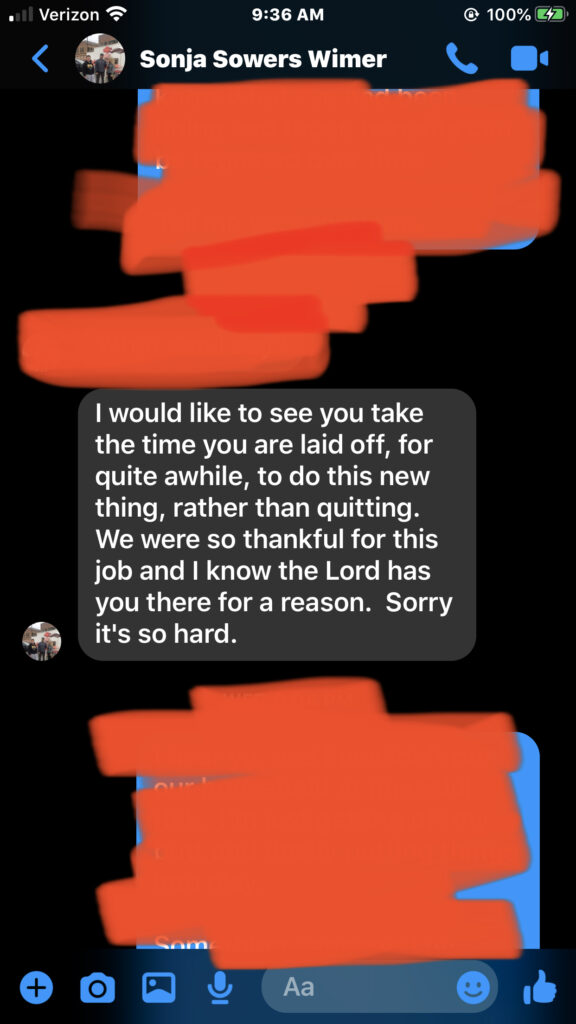 And then, out of nowhere, this came from another sister in Christ. 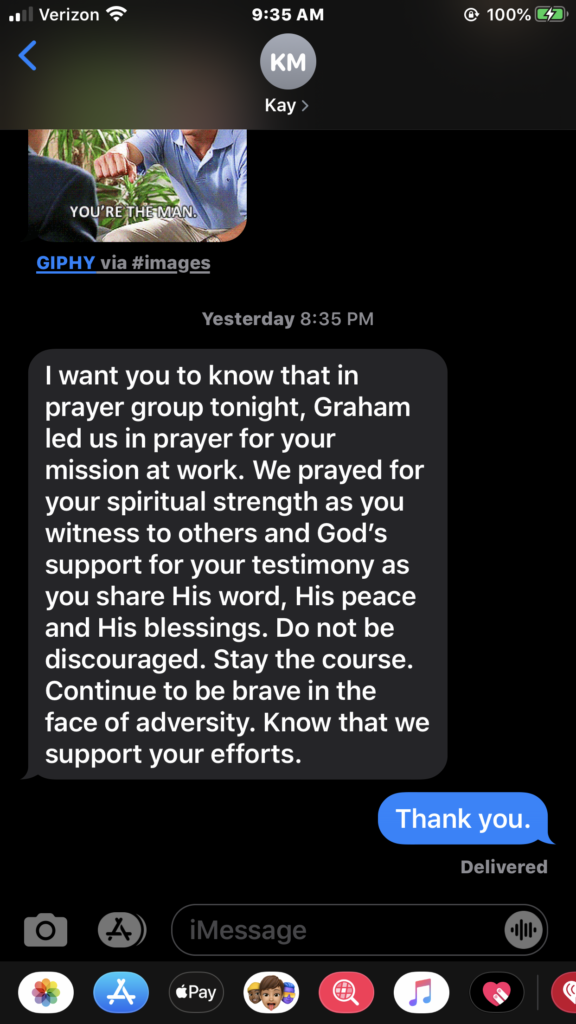 I fully believe that God was not only sending me conformation (He knows I need to be spoken to in a certain way) about my purpose at work, but also that my “lifting of spirits” happened at the same time my brothers and sisters in Christ were praying for me at the prayer meeting.

Bringing the fight to the enemy!

There is a quote by C. S. Lewis which reads:

“Enemy-occupied territory—that is what this world is. Christianity is the story of how the rightful king has landed, you might say landed in disguise, and is calling us to take part in a great campaign of sabotage.”

From my chair, I had begun my first act of sabotage on an enemy stronghold that had existed for far too long.

When I returned to my workplace after my second break, God told me that “I wasn’t using my weaponry.”  I understood what He meant – I wasn’t using the Word of God to defeat the darkness that I was working in when I punched the clock.  I asked God how I can do this and He told me, “when this happens again, take out your Bible (app) and read aloud.  Combat the darkness with light, because you’re not wrestling with flesh and blood (Ephesians 6:12). 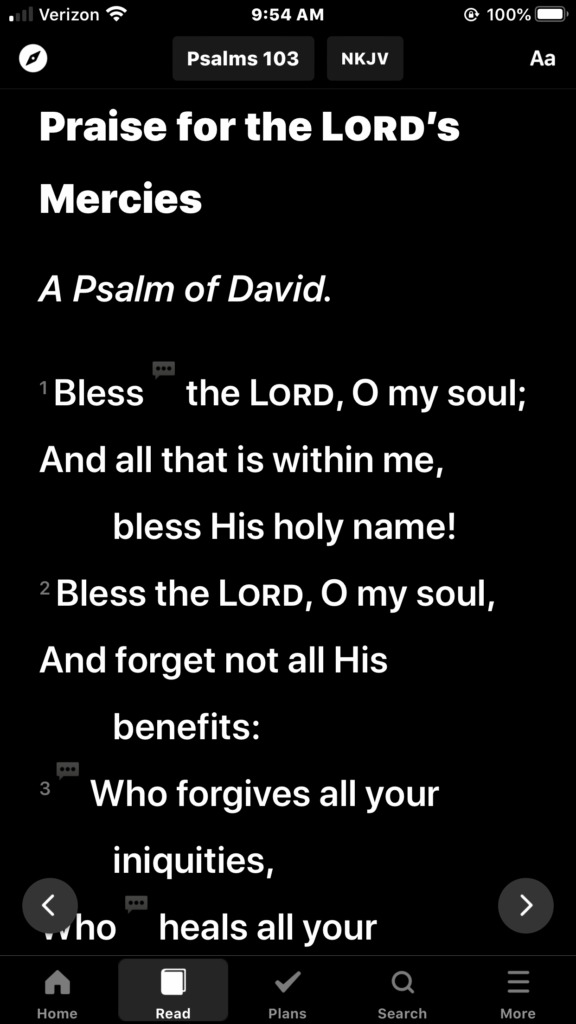 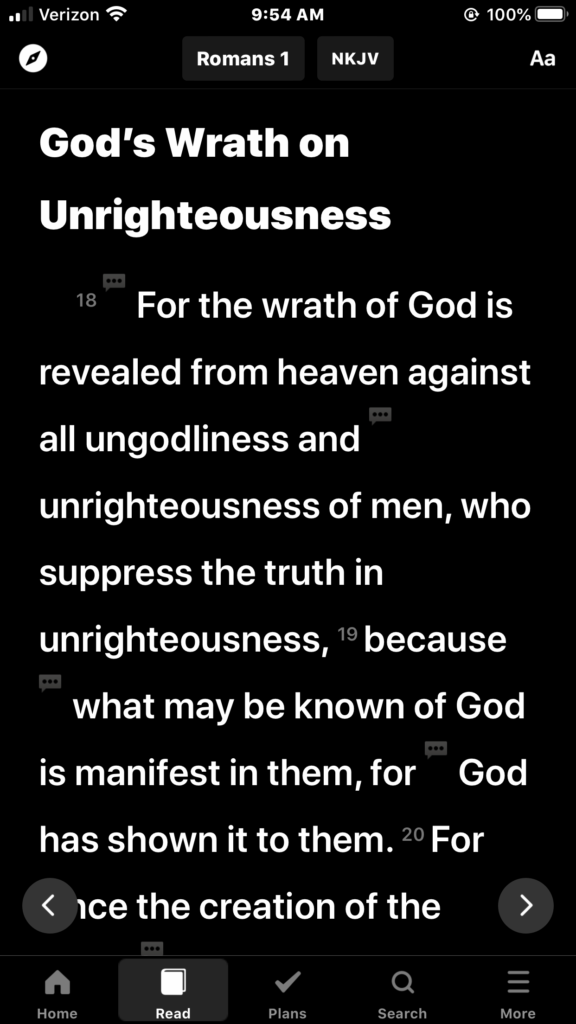 This is my choice, and mine alone.

Yes, I could go to HR and file a legitimate complaint, as pornography in the workplace is illegal and should never be tolerated, even if you’re a guy and society says, “you’re a dude, you like porn,” but I’m a Christian and I will not have others fight for me because I come in the Name of the Lord, while others come with only sword and spear (1 Samuel 17:45.)  I would not presume to tell anyone how to fight this sort of stuff and going to HR to file a complaint is not a “wimps” way out, but this is how I’ve chosen to “correct the situation.”

A note about pornography & epilogue

While this article may leave you feeling sad and defeated, I hope that it has not.  In fact, I hope that you can learn from my experience and maybe, just maybe, be the light that shines bright in your workplace, defeating the powers that prevail there (only if you are a Christian – those that aren’t, have no authority other than earthly means) with your New Being through Jesus Christ and the power of the Word of God (Bible).  By being salt and light in the workplace, you show your good deeds to all around you and help to lead others to the saving grace of Jesus Christ, so they can be released from the bondage and outcome of sin. 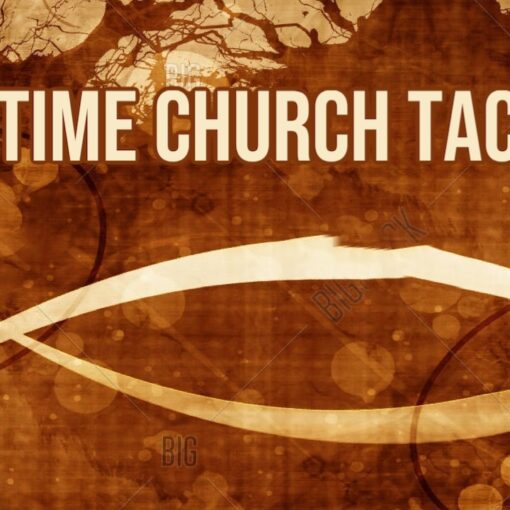 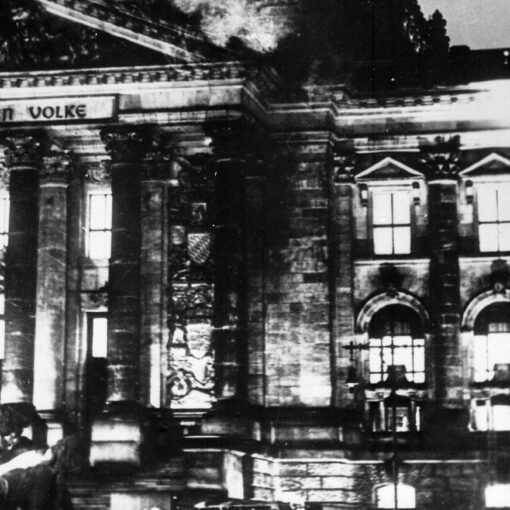 The rise of a tyrant. 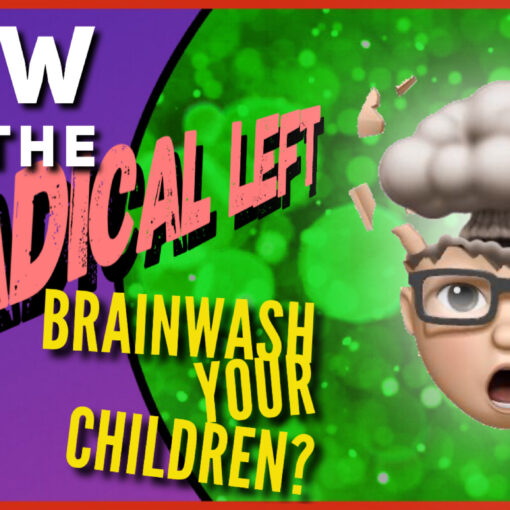 What is their agenda & how do they do it?